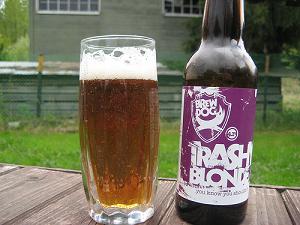 BrewDog has been slammed by the ad watchdog, after a single complaint was upheld against the foul language used on its website, including the phrase, “BrewDog is a post Punk apocalyptic mother fu*ker of a craft brewery”.
The Scottish company, whose brands include the likes of Trashy Blonde, Dead Pony Club and Hardcore NZ, is rarely far from controversy, although its website seems to have gone too far for the Advertising Standards Authority.
The foul-mouthed rant took the form of a statement hosted on its homepage. It read: “BrewDog is a post Punk apocalyptic mother fu*ker of a craft brewery.  Say goodbye to the corporate beer whores crazy for power and world domination … Ride toward anarchy and caramel craziness.  Let the sharp bitter finish rip you straight to the tits. Save up for a Luger, and drill the bastards.”
Upholding the complaint, the watchdog noted the asterisk used in “mother fu*ker”, but considered its inclusion did not obscure the intended meaning and it was still clear that it represented a swear word, one generally regarded as highly offensive and unlikely to be acceptable in marketing communications, said the ASA.
It added: “We considered that the other language used on the page, such as ‘corporate beer whores’, ‘rip you straight to the tits’ and ‘Save up for a Luger and drill the bastards’, was also likely to cause serious offence to some people.”
BrewDog declined to provide substantive evidence to the ASA, instead it simply removed the statement.
However, it did receive a stiff warning about its future conduct, and was cautioned against causing serious offence in the future. The case has also been referred to the CAP compliance team.
UPDATE: BrewDog has issued a bizarre reposte to the ASA, slating the regulator’s “pen pushers in Burton suits”. The company said: ““We removed the statement from the site because we needed to make room to talk about our Equity for Punks offer. We’ll be putting it back up once the share offer is over. We have thousands of craft beer fans who have invested in what we do and how we do it – they are the people we listen to – not the killjoy, self-important pen pushers at the ASA in their Burton suits. Those mother fuckers don’t have any jurisdiction over us anyway.”