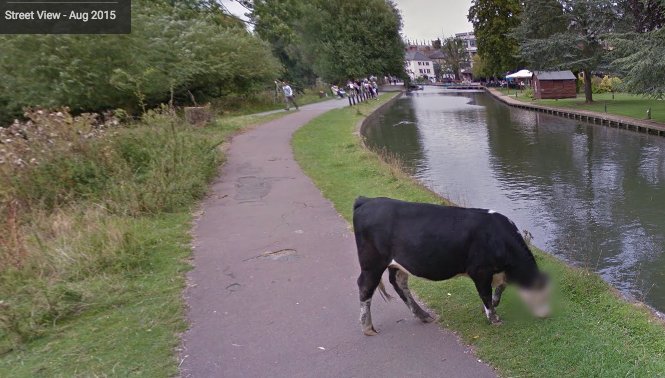 Google has admitted its face-blurring technology may have been “a little overzealous” after it emerged that a bullock which was photographed for its Google Street View mapping service at Coe Fen, near Cambridge, had its face blurred for privacy reasons.
The animal’s face can clearly be seen in an image taken further away, but Google’s privacy police seemingly felt it was a breach of its “animal rights” so blurred it for the close-up view.
A tweet by The Guardian’s David Shariatmadari exposing the issue has already been the retweeted nearly 13,000 times, with just over 16,000 likes – and counting.
Shariatmadari had spotted the issue and posted it on Twitter, saying it was “great to see Google takes cow privacy seriously”. Cue more responses than you can shake a cow pat at, including “Udderly ridiculous,” from one user and “Google teat view,” from another.
Even Google tried to display a sense of humour, with a spokesman saying: “We thought you were pulling the udder one when we herd the moos, but it’s clear that our automatic face-blurring technology has been a little overzealous. Of course, we don’t begrudge this cow milking its five minutes of fame.”
Google’s Street View launched in 2007 and ran into trouble with the ICO after an audit of its data protection policies found that the company had unlawfully collected data from household Wi-Fi networks, including emails and passwords, while compiling the mapping service. However, MPs later accused the regulator of letting Google off the hook.

Chelsea FC banks on the kids with messenger launch