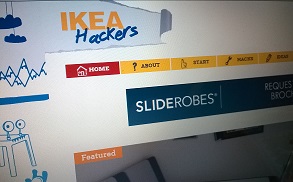 Ikea has been bludgeoned into reconsidering legal action against fansite IkeaHackers.net – after demanding it removed all advertising – following a public outcry from the company’s own customers.
The site was set up in 2006 as a simple blog-post but has now gained a global following, having published over 3,000 Ikea customisations to date.
At the weekend, its founder published a post on the site detailing the fall out from a “cease and desist” letter served by a lawyer representing Ikea, which claimed the blog was infringing on the company’s intellectual property rights. Following negotiations, the furniture giant agreed to let the domain name remain on the condition that the site did not run any advertising, but those behind the site claimed this would make it unsustainable.
The move triggered an outpouring of support for the site from users, as well as the wider public, with many pledging to write to Ikea’s customer service team to express their disappointment.
The IkeaHackers Facebook page has attracted a string of supportive comments from its 135,000 fans. “Don’t they realise your site is actually helping their business? They should hire you!” one posted, while another wrote: “Bad move, Ikea! 80% of the items I’ve purchased there over the past five years are due to something I saw on IkeaHackers, not in their catalogue.”
Even a team of marketing professors from Finland’s Aalto University have launched a petition urging the company to overturn its decision: “In our view, Ikea’s decision painfully highlights how being in the right, legally speaking, does not mean you are in the right morally or even strategically. Communities like IkeaHackers have contributed, without exaggeration, millions of hours of free labour that have significantly benefited the Ikea brand.”
IkeaHackers has now posted an update saying Ikea had agreed to reopen negotiations about the site. It read: “Ikea would like to dialogue with me to find a new way forward. What does that mean? I don’t know yet. But I am hopeful, though my guard is still up. From our conversation, I do not have to make any changes to IkeaHackers (including the ads) till we settle on an agreement.”
An Ikea spokeswoman told Dezeen.com that the company deeply regretted the situation. She said: “[It had] never been our ambition to stop their webpage. On the contrary, we very much appreciate the interest in our products and the fact that there are people around the world that love our products as much as we do. We are now evaluating the situation, with the intention to try to find a solution that is good for all involved.”
This is not the first time the flatpack giant has gone over the top. Last year, it threatened to close down an unofficial site, which uses pornography-style phrases such as “Check out the pussy on this Hot Malm” to promote Ikea furniture.
The site HotMalm.com – created by an employee of New York-based ad agency Droga5 – draws in visitors offering videos with titles such as ‘Twin Blonde Malms’ and ‘Hot Malm from Behind’.