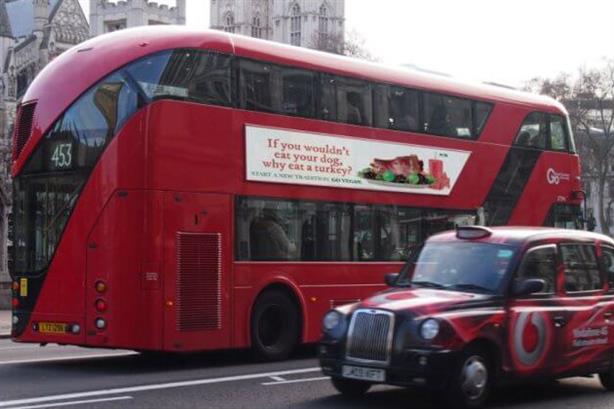 The wind-down for the festivities normally means just one thing for animal rights charity Peta; time to wind up  media owners,  and this year it has delivered right on time by attempting to run a campaign promoting a vegan Christmas with a poster featuring a severed dog’s head on a seasonal platter.
But, in a move which is as predictable as Christmas travel chaos, Transport for London (TfL) has scuppered plans for the activity which Peta bosses claimed would have shown a glazed and roasted dog’s head on a platter next to the words: “If You Wouldn’t Eat Your Dog, Why Eat a Turkey? Start a New Tradition. Go Vegan.”
Back in 2014, it ran a similar ad on a single site, featuring a dog collar on a plate with the remains of a roast dinner, and the same strapline.
Peta insists the poster (pictured in a mock up by the charity) was due to go live on 100 buses in the capital over Christmas. However, Transport for London refused to run the activity on the grounds that it may cause offence, Peta claimed.
Peta director Elisa Allen said: “It’s shameful and confusing that Peta’s campaign was rejected when Londoners are bombarded with ads selling turkey corpses. Our ads ask everyone to offer some comfort and joy to all living beings this Christmas by enjoying a festive meal that doesn’t have a dead animal’s corpse as the centrepiece.”
A TfL spokesman said Exterion Media UK rejected the campaign following advice from the Committee of Advertising Practice (CAP).
Whether the animal rights charity would have had the funds to run a campaign on this scale is debateable, however. Recent activity has centred around cunning stunts, designed to create maximum publicity for minimum spend.

BrewDog ordered to clean up its act after ‘motherfu’ ad