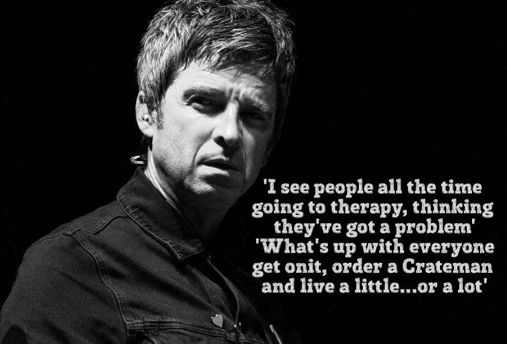 Manchester firm Drink Doctor – which offers “emergency alcohol deliveries” in an ambulance-style Boozebulance – has been slammed for a Facebook campaign which trivialised addiction through a number of posts, including one that featured Noel Gallagher urging consumers to “get onit”.
The “memes” read: “People are not addicted to alcohol or drugs, they are addicted to escaping reality”; “According to chemistry, alcohol is the solution”; and “In Jerusalem there is the Wailing Wall. We have the WINEing Wall in Manchester.”
Meanwhile the image of the former Oasis frontman was accompanied by the text: “I see people all the time going to therapy, thinking they’ve got a problem. What’s up with everyone get onit, order a Crateman and live a little…or a lot.”
However, one reader complained to the Advertising Standards Authroity that the ads were irresponsible for promoting “unwise” drinking styles and trivialising alcohol addiction.
In its defence, Drink Doctor said it had simply attached its brand to popular memes, but could see how “sometimes that could be deemed a little inappropriate”.
Upholding the complaint, the Advertising Standards Authority (ASA) said the ads were likely to encourage excessive drinking and imply that drinking alcohol could help people cope with personal problems by “escaping the reality” of their lives.
Concluding that all four ads were irresponsible, the ASA ruled that the ads must not appear again in their current form.
It said: “We told Drink Doctor to ensure in future that their ads contained nothing that was likely to lead people to adopt styles of drinking that were unwise, including by not encouraging excessive drinking, and that they did not imply drinking alcohol could overcome boredom, loneliness or other problems.”
The firm is hardly a stranger to controversy. In 2015, it was rapped by the ASA for a Facebook campaign that featured a busty nurse in a skimpy uniform; at the time the ASA said the branding inferred alcohol was ‘necessary and indispensable’ and provided ‘therapeutic qualities.’
Founder Jay Browne slammed the ruling as “pathetic”.