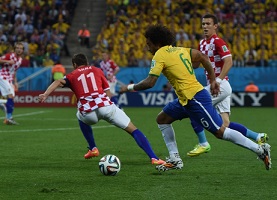 A number of senior marketing executives are reportedly among the top Fifa officials charged with corruption by Swiss police after this morning’s 6am raid on a luxury Swiss hotel.
Undercover officers raided the five-star Baur au Lac hotel in Zurich just hours before football’s governing body was due to convene its annual meeting.
Four sports marketing executives, named by the New York Times as Alejandro Burzaco, Aaron Davidson, Hugo Jinkis and Mariano Jinkis, are accused of paying in excess of $150m in bribes. Authorities also charged José Margulies for facilitating illegal payments.
They join nine other officials charged with racketeering, wire fraud and money laundering, including the controversial figure Jack Warner, who has since pleaded his innocence by saying: “I have fought fearlessly against all forms of corruption.”
One law enforcement officer was quoted as saying: “We’re struck by just how long this went on for and how it touched nearly every part of what Fifa did. It just seemed to permeate every element of the federation and was just their way of doing business. It seems like this corruption was institutionalised.”