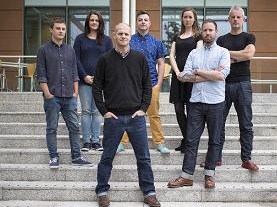 Rapp UK is continuing to bolster its creative team with a double promotion and four hires – following last week’s appointment of its first innovation chief – on the back of a number of new business wins and growth from existing clients.
The move sees former associate creative directors Jacob Kirk and Clare Wilson shift up to creative directors, to work alongside existing creative director Alison Hanan.
Wilson has worked at Rapp for three years, joining from Domain, while Kirk has been at the agency four years and was previously at Partners Andrews Aldridge. They were promoted to associates last year.
Executive creative director Jason Andrews said of the promotions: “This appointment recognises their ongoing commitment to producing great work, inspiring the teams working into them and clients’ continual appreciation of their ideas and leadership. Barclaycard, CRUK and Google will now come under their direction.”
In addition, Daryn Lawrence and Simon Kavanagh have joined as associate creative directors, overseeing the Virgin Media acquisition business. Both had previously been freelancing separately, but have worked at the likes of CHI, Joshua and Arnold Worldwide.
Two other new additions are Emma Leamore and Mick Pollard, who graduated together from Salford University and have had placements at Isobel and Hypernaked. They join as a creative team.
And, in a further shake-up, senior copywriter Rohan Candappa is moving to work on the Virgin Media business and senior copywriter Terry Trower to Barclays. Meanwhile, Shelby Meale and Russell Garn, who were also promoted to associate creative directors in May last year, move to Barclays and Barclaycard from Virgin Media.
Last week, Rapp appointed Leo Burnett digital and user experience specialist Marcus Kirsch the new role of innovation director.
(pictured, left to right: Pollard, Leamore, Kavanagh, Kirk, Wilson, Lawrence, Andrews)

I am worried about Lord McKelvey. Whilst draining the moat of the smaller Bavarian Castle Folly at his vast Sussex…