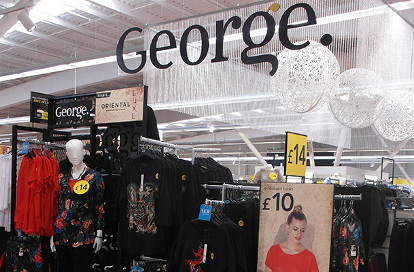 Asda has started trials of its first ever loyalty programme, some 70 years after the supermarket chain was founded in Yorkshire, offering customers points when making purchases from its George clothing and homeware range.
The new programme, George Rewards, is only initially available online and requires a George.com account before shoppers can start collecting points, although during the trials customers receive 100 points for just signing up.
Shoppers will earn one point for every £1 spent on the range and double points on orders of £50 or more, excluding delivery charges, which will be automatically added to their account.
Unlike rival Tesco Clubcard and Sainsbury’s Nectar, points do not count against the entire Asda range, only against George products and mirroring the M&S Sparks card will include tailored discounts.
For instance, 100 points is worth a 10% discount on girls’ clothing while 120 points opens up 10% off baby clothing.
Asda has been developing its SCV; a platform for analytical and targeted, relationship marketing for the past four years, despite historically relying on discounts and price promotions to keep customers sweet.
Whether the loyalty scheme is rolled out, however, is likely to depend on the outcome of the Competition & Markets Authority probe into Asda’s merger with Sainsbury’s.
Sainsbury’s bought Nectar for a “knockdown” £60m in February last year, and, at the time, one insider said it would be “madness” not to expand the 19 million member scheme to Asda stores.
The source said: “The customer data held by both Sainsbury’s and Asda would be a treasure trove for data-driven marketing. It would be madness not to bring Asda into the Nectar fold.
“Let’s face it, Nectar has never quite lived up to its billing. But this deal could be just the catalyst it needs to really take off.”